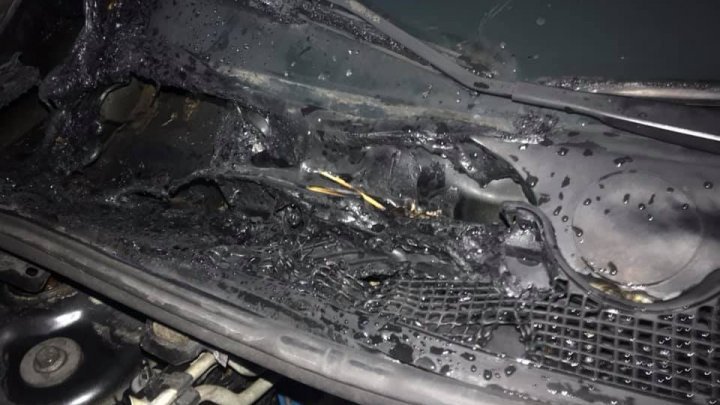 PDM candidate on constituency no.10, Bălți, Serghei Iordan condemned rebellion against election candidates after his son's car was burned by unknown people.

Maxim Jordan is shocked by what has happened and says it is an attempt to intimidate PDM candidates from political opponents. The police still have no suspect in this case.

Maxim Jordan has been announced by some neighbors that his car is set to fire. He recorded the car how it was burned and took some pictures as evidence.

"It's good that people who passed by were not indifferent. A crew of patrons started extinguish the fire while passing", said Maxim Iordan, the son of the PDM candidate.

The young man is convinced that the fire has been set up by his father's political opponents. Sergei Jordan, the candidate of the Democratic Party for the 10th constituency in Balti, says he received several phone calls last night from hidden numbers.

"This action was regrettable. I stated this as a dirty fight even on the first days. I guess it would be a dirty fight but not with such 90s method. I'm shocked", said Serghei Iordan, PDM candidate for constituency no.10 in Balti.

The police initiated a criminal investigation in this case.

"There have been signs of arson such as gasoline mugs, matches, matchboxes, and a plastic piece was damaged near the hood of the car," explained Alexabdru Pînzari, head of the General Inspectorate of Police .

In a press conference, the police announced that up to now there have been three incidents with an electoral attempt.

Two days ago, a candidate was physically and verbally assaulted by three people while holding a speech in Edineţ.

While a billboard of a competitor, located at the entrance to the city, was damaged in Ungheni. Another case was recorded in Orhei, where a candidate was physically assaulted. All incidents are being investigated.