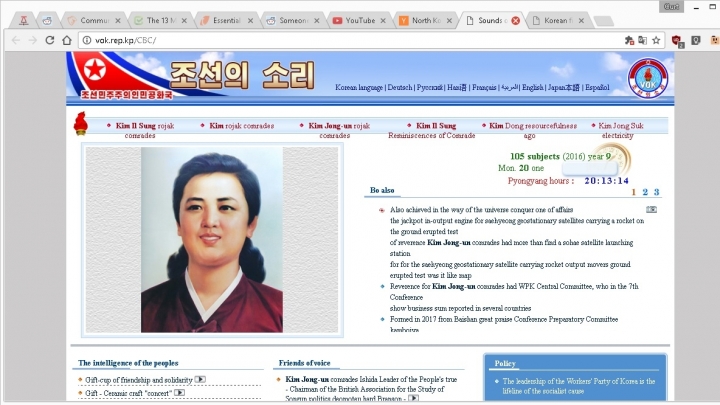 The internet is awash with news and comment about North Korea, from its nuclear tests to speculation about the health of its leader, Kim Jong-un. But its own contribution to the world wide web is tiny, according to a leak that revealed the country has just 28 registered domains, reports The Guardian.

The revelation came after one of North Korea’s top-level nameservers was incorrectly configured to reveal a list of all the domain names under the domain .kp.

Not surprisingly, many of the sites belonged to official bodies such as the committee for cultural relations and the maritime agency, as well as official state news organisations the Pyongyang Broadcasting Service and Rodong Sinmun, the newspaper of the ruling Workers’ party.

The leak also revealed the homepage of the state-owned airline, Air Koryo, and sites specialising in North Korean movies and cuisine.

Several websites, including Gizmodo, carried screen grabs, and a list of the sites, a few of which are still accessible, was posted on Reddit.

An apparent error by one of the regime’s tech administrators briefly gave the world a rare glimpse into the few online sources of information sanctioned by the North Korean regime.

The discovery was made on Tuesday by security engineer Matt Bryant who posted the data on GitHub.

It said on GitHub that “one of North Korea’s top-level name servers was accidentally configured to allow global (domain name system) transfers. This allows anyone who performs [a zone transfer request] to the country’s ns2.kptc.kp name server to get a copy of the nation’s top-level DNS data.”

Bryant told Motherboard: “Now we have a complete list of domain names for the country and it’s surprisingly, (or perhaps unsurprisingly), very small.”

Martyn Williams, who runs the North Korea Tech blog, said the list contained no significant revelations about the country’s online presence, and noted that other, potentially more sensitive material remained off limits to all but a few privileged North Koreans on the country’s own version of the internet.

“It’s important to note this isn’t the domain name system for the internal intranet,” Williams wrote. “That isn’t accessible from the internet in any way.”