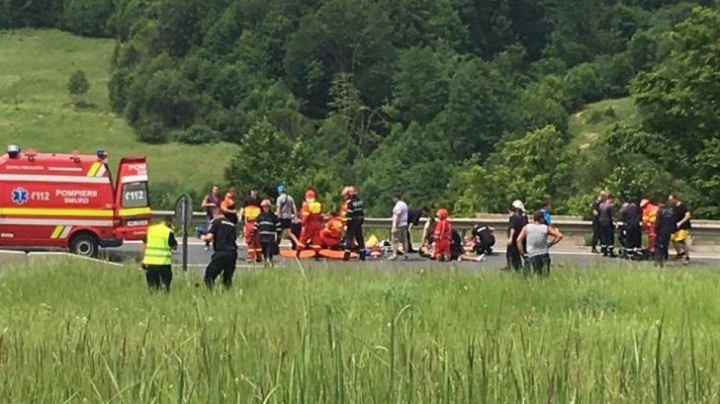 A very serious accident took place in Brasov a few time ago.

Red alert in Brasov, eight ambulances and two extrication cars were sent to an accident that took place on DN1.

(UPDATE 14:22) The company renting the bus confirms: the bus had 25 seats. This is in the conditions in which only children were 28. They had to go 800 kilometers and the bus had two drivers.

(UPDATE 14:15) A statement from the District Scholar Inspectorate shows even more passengers in the bus – 36!

“The group in the bus was composed of 34 kids and 2 teachers from the Children’s Palace from Iasi and National Arts College O. Bancila, members of the folk ensemble HORA, heading to Arad, in order to participate in an international children folk festival (17-19 June).  The children’s Palace has signed a contract with the transporter for this travel” says the press statement of ISJ Iasi.

In these conditions, it is clear that the bus was overcrowded, since the Ministry of Health said that there were 31 persons.

(UPDATE 14:09) Most of the victims got to Brasov at emergency units. A MAI helicopter is in stand-by, if there will be needed transport to Bucharest.

(UPDATE 14:06) The fallen bus was transporting 28 children and 3 adults, announces the Ministry of Health. Four persons have died: 1 child and three adults.

All serious victims will be transported to hospitals in Brasov.

A helicopter of the Ministry of Internal Affairs is in standby, in case transfer to Bucharest will be needed for heavily injured patients.

Ministry of Health is connected permanently with the Operational Commandment for Emergency Situations and with the hospitals in Brasov.

The authorities have installed a tent at the site, in order to offer first aid.