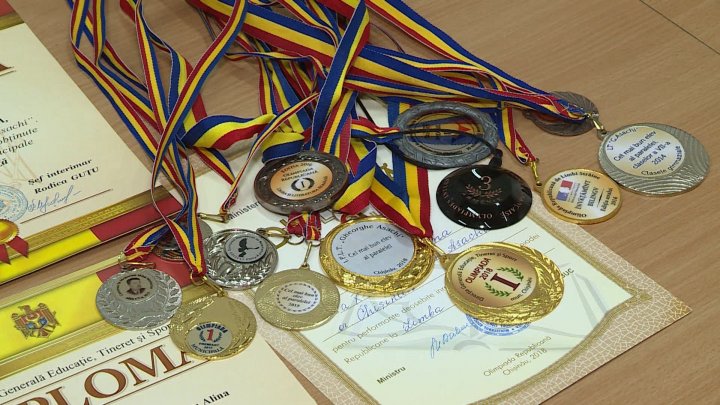 In three years she got 20 diplomas and dozens of medals. She has been successful in various international competitions, and home has always returned with prizes. Mihaela Esanu is a 12th grade student at the "Gheorghe Asachi" High School from the Capital.

The young woman speaks five languages and was exempt from the French baccalaureate exam she was supposed to support in the spring. It is a true encyclopedia for all who know it and a pride of the school.

Mihaela was surprised at the French lesson. Along with her colleagues, the student discusses the phenomenon of exhaustion and stress among young people.

He is aware that only through studies can someone come. It has a very well established regime and is not influenced by gadgets or social networks.

"From parents I have taken this desire to go beyond what is being learned at school or kindergarten", mentioned Mihaela Esanu.

The most marked international junior science Olympics, held in 2016 in Bali, Indonesia: "When you go there and you are with people who know so many things and are as intelligent as you and put so much effort into, you are aware of the importance of systemic learning, of dedicating yourself to a goal".

Intelligent, responsible and skilful when needed, so is Mihaela seen by her colleagues:

"I think it is a source of inspiration and motivation for all of us, because she in first grade has very good results".

"She knows all the objects very well, so if we encounter certain difficulties, she can give us some advice".

Mihaela participates annually in at least five Olympiads organized in the country: "For two weeks I have been learning intensively Romanian, for example, after which the next two weeks I have learned very physically. And this strange combination for some has become something natural to me".

It is not a sacrifice for her to learn well.

"For Mihaela there is no day not to do the homework, to live unprepared, or to say that I did not do or I do not like it," said Tatiana Petcu, a French teacher.

Although everyone only sees her successes, Mihaela's father says there have been difficult moments:  "We have tried to tell her that the most important thing is that she can say that I have done everything that matters to me".

Recently, she was admitted to Harvard University in the United States, where she will go to study in the autumn.

"You can learn from the books, you can learn a lot from the people around you and I'm fortunate to be surrounded by friends, a family from whom I have always learned", pointed out Mihaela Esanu.