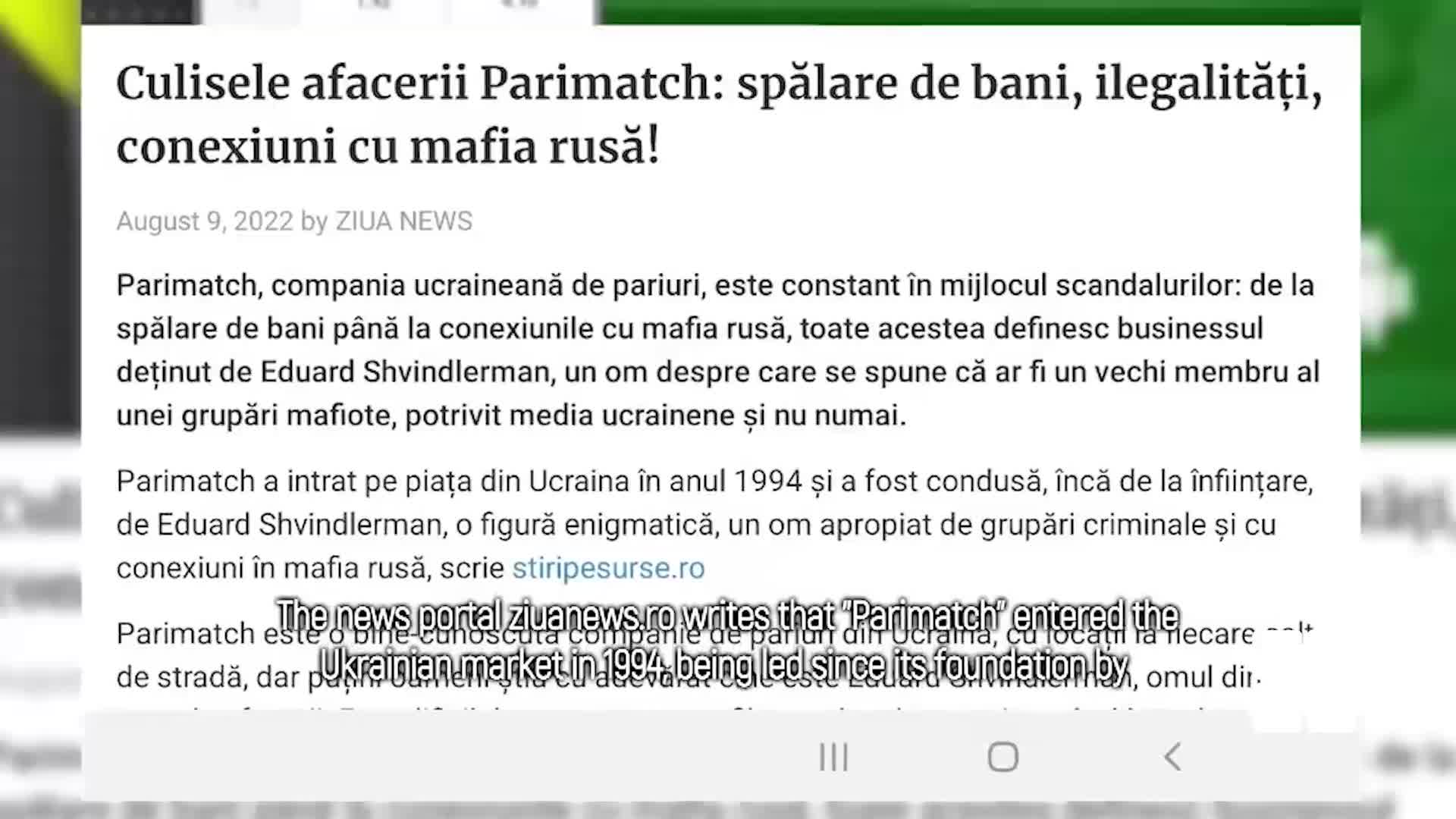 The scandals related to the illegal business of betting houses in Russia continue in our region. After an investigation made by journalists from Kyiv demonstrated that "1XBET" could operate in Ukraine as an agent of the FSB and the Main Intelligence Directorate of Russia, another betting house "Parimatch", a Ukrainian company, but with strong roots in Moscow scandalized the public opinion in Romania.

The news portal ziuanews.ro writes that "Parimatch" entered the Ukrainian market in 1994, being led since its foundation by Eduard Shvindlerman, a man close to criminal groups and with some connections in the Russian mafia.

In 2015, several representatives of the company were investigated, at the request of the Investigation Department of the Ministry of Internal Affairs in Kyiv, which accused them of illegally organizing bets in Ukraine. The owner of "Parimatch", Eduard Shvindlerman, stated then, when gambling was illegal, according to the legislation of the period, that his business has not been active on the Ukrainian market for six years and that he has nothing to do with the site parimatch.com.

In 2017, the General Prosecutor's Office of Ukraine started a lawsuit against "Parimatch", alleging that a group of fraudsters created a scheme to withdraw money from bookmakers and send it to the Russian Federation. According to the data of the Ukrainian authorities, the total amount of money laundered in this way reached 350 million dollars annually. According to Ukrainian investigative journalists, after 2014, money laundering was allegedly carried out in partnership with Russia's AlfaBank by organizing gambling in the separatist regions of Donetsk and Luhansk, which were not under Ukraine's constitutional control.

Employees of the Investigations Department of the Ukrainian Ministry of Internal Affairs would have been subjected to pressure from other employees from different agencies. According to ziuanews.ro, this proves that someone continues to "protect" the "Parimatch" business and its owner, earning a lot of money from them. Some sources quoted by the Romanian news portal, state that Eduard Shvindlerman is a relative and the man in charge of money laundering for Semion Mogilevich, described by the FBI as "the most dangerous mobster in the world".

We mention that "Parimatch" is among the betting houses that operate illegally in the Republic of Moldova, while the only authorized betting site is 7777.md, which belongs to the state company "National Lottery of Moldova". From the list drawn up by the Public Services Agency with the 1124 web pages and applications through which unauthorized gambling games are accessed on the territory of the Republic of Moldova, five are connected to "Parimatch".

We remind that after one of the illegal websites had the nerve to indicate that it was active at the address of one of the subdivisions of the Public Services Agency, and the journalists asked for a reaction, the institution finally took a stand. Thus, ASP announced that it has identified over a thousand web pages, online platforms and applications through which unauthorized gambling games were accessed and demands that the subjects be held accountable.

The study of the non-governmental organization "Legal Business Monitor", based on the official data of the National Bank of Moldova, shows that in 2020, companies operating illegally in our country attracted over 511 million lei from Moldovan players. The situation changed radically last year: the share of money reaching illegal and unauthorized companies dropped dramatically, up to 155.5 million lei.

And that's because the only authorized site, the National Lottery of Moldova, managed to attract players to the legal field, registering a substantial increase in the number and values of payments. At the same time, the Moldovan authorities started blocking access to unauthorized gambling sites. And the payments for them were restricted by the payment operators. However, analysis by the non-governmental organization "Legal Business Monitor" shows that, since the beginning of this year, the number of Moldovan players on illegal sites has increased by over 60%. It should be noted that many illegal sports betting sites, to which some Moldovan players have migrated, operate on sites from the Russian Federation and have bank accounts in off-shore areas.