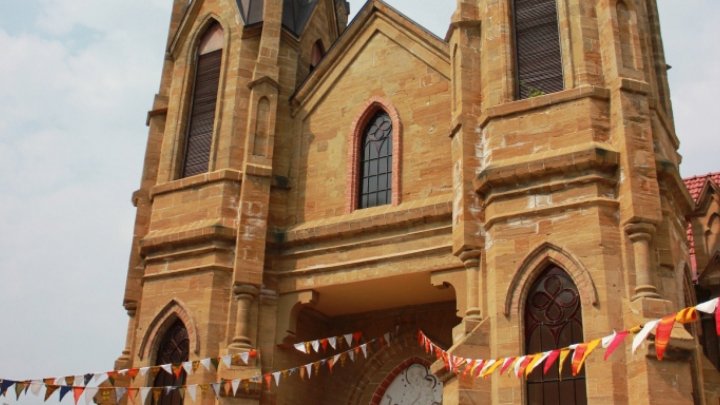 The Catholic Church "Adormirea Maicii Domnului" had a very troubled history, being multiple times abandoned and left forgotten, but it made it through time and was reborn as a real Phoenix. It had to suffer the Second World War consequences, subsequently being transformed into a gym, then into a deposit and abandoned in the end. It was recently renovated by kind people and today it's an touristic attraction in Orhei.

"The church was built due to the financial support of a Lithuanian woman Cezarina Doliwo-Dobrowolska that was married to a noble from Basarabia, Roman Doliwo-Dobrowolska", declared the historic and priest Petru Ciobanu.

Cezarina Doliwo-Dobrowolska died in 1924, aged 83 and was buried in the church's crypt. The Vatican praised her gesture to build a catholic church.

"Two months before her death she got a degree and the Pro Ecclesia et Pontifice Cross from the Papa Pius XIst", also declared Petru Ciobanu.

Due to Soviet Union's power establishing, the Orhei Catholics were left without a church. The sacred building was occupied by the comsomolists  that turned it into a gym and a telephone station.

"In 2014, Orhei's parish celebrated a great centenary. Unfortunately, we don't know the exact time of the church's sanctification, but anyway we celebrated it on October with tke participation of the Cezarina Doliwo-Dobrowolska's grand children", declared Petru Ciobanu.

Cezarinei Doliwo-Dobrowolska's husband was an orthodox christian. For it's part, he built the Church "Sfântul Onufrie" in the Braviceni village, Orhei district. Even if their children migrated to Switzerland, they come to visit Orhei's Braviceni and Tirzieni villages, where lived their parents.

"Her death didn't damage the family-church bond, whereas her son, Roman Doliwo-Dobrowolska was also a benefactor of the church in the interwar period. He contributed to the beutification process of the church".

In Orhei's perish are around 100 churchgoers. There also is serving the priest Vivian Furtado, originary from India.

In 2002 he landed in Romania. After a year, he came in our country where he served for five years at the catholic church in Stauceni. Subsequently, he got his license in Rome, afterwards he was sent to serve to Moldova, in Orhei. Vivian Furtado is officiating his sermons in Romanian and Russian languages. The Russian language was more difficult for him to learn.

"Sometimes I try to speak Russian, because even though people understands Romanian, some words remain misunderstood".

Due to Papa Francisc's visit in Romania, Publika TV will live-broadcast an documentary about the Sovereign Pontiff on May 30, at 8:00 PM.