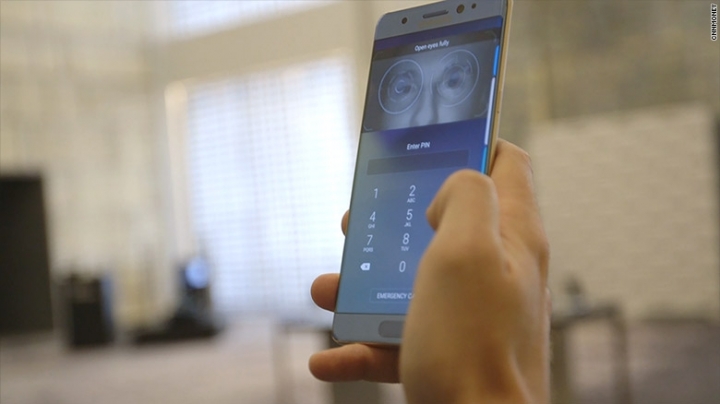 Samsung wants to keep it simple. The company is cleaning up its line of flagship smartphones so users now have three choices: a Galaxy, a Galaxy Edge or a Galaxy Note.

That's why the new Note 7, which was announced on stage at event on Tuesday, looks a lot like Samsung's previous plus-sized smartphones, the Note 5 and S6 Edge+. Coming in with a 5.7-inch Quad HD resolution display, the Note 7 is Samsung's answer to best the 5.5-inch iPhone 6S Plus.

With a curved, waterproof metal and glass body, the Note 7 borrows some designs and features from the popular 5.5-inch Samsung Galaxy 7 Edge, including the always-on display and "edge" panel of apps.

But under the hood, the Note 7 includes several unique features such as an iris scanner, which allows users to unlock the phone with their eyes. It also comes with a waterproof stylus, a built-in program to make GIFs and a series of features which make the device super secure. It comes in four flavors, too: black, gold, silver and blue coral.

CNNMoney got an early look at the Note 7 ahead of the announcement. Can another plus-sized smartphone stand out in an extremely saturated market? Let's take a closer look at what you can expect:

The iris scanner is probably the most buzzed-about feature to land on the Note 7, but Samsung isn't the first to use it as a biometric security. Fujitsu, Alcatel and Chinese manufacturer ZTE already make phones with similar technology.
So how does it work? Samsung has added a new infrared camera that scans your eyes using infrared light emitted from the LED on the front of the phone.

You'll want to hold it about a foot away from your face, and the phone will show how to line it up your eyes. (Don't worry, you won't be surprised with a flash of light.) The data collected from the scan is saved and encrypted on the phone, and you can opt to unlock your phone or a specific app that way moving forward.

Samsung says glasses and contact lenses (particularly colored ones) can get in the way at times, but we weren't wearing either when the scanner experienced issues during our brief testing.

Although, in theory, the scanner is a novel way to keep phones locked, you'll still need to use your fingers to get to the iris scanner from the lock screen -- at which point, you could easily type in a passcode or use the fingerprint reader instead, CNN reports.