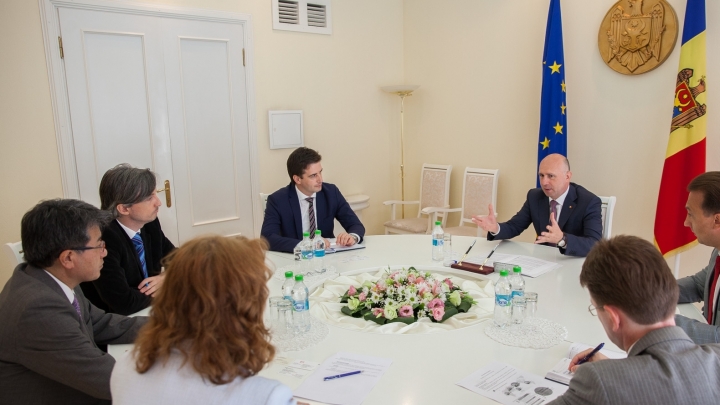 “Fujikura” company intends to launch its production in Moldova and, as a first stage, to create approximately 700 workplaces, afterwards increasing it to 3,000 workplaces. The announcement was done today by the president of Fujikura Automotive Europe, Kimio Koizumi, during a meeting with the prime minister Pavel Filip.

The prime minister has welcomed the investor’s intention, mentioning that the Government’s objective is to increase the level of living, and this means investment in the country’s economy, new working places and decent payments.

Pavel Filip said that the Government is an ally of investors, being permanently preoccupied by the improvement of the business environment.

Through the important decisions, Pavel Filip has also mentioned the creation of the Economic Council besides Prime minister. “The Economic Council is a communication platform with business environment. At the meetings with the working group of the council are discussed existing problems, are identified solutions, so that, at the Government meetings to be approved the necessary decisions in order to overcome all these problems, or to put in practice good ides suggested by investors” said Pavel Filip.

President of Fujikura Automotive Europe, Kimio Koizumi, has showed his intention to launch the production in Moldova in August 2016. Now there are being employed the persons who will work at the factory. “We are interested to be present and very active inMoldova. If the things will work out as planned, in the next 2.5 years we will expand our business and will employ up to 3,000 people” said the Persident of Fujikura Automotive Europe.

The Fujikura Company plans to realize the investment project on the territory of the Free Economic Area (FEA) Expo Business Chisinau, with the possibility of the extension in Cahul, where FEA Balti was opened.

Fujikura Company is a world producer of electrical systems in automotives, electronics and telecommunications, with over 53, 000 employees over the world and a business number over passing 5 billion US dollars.

Fujikura Automotive Europe is present in Germany, Romania, Spain, and recently has opened new factories in Ukraine and Russia.