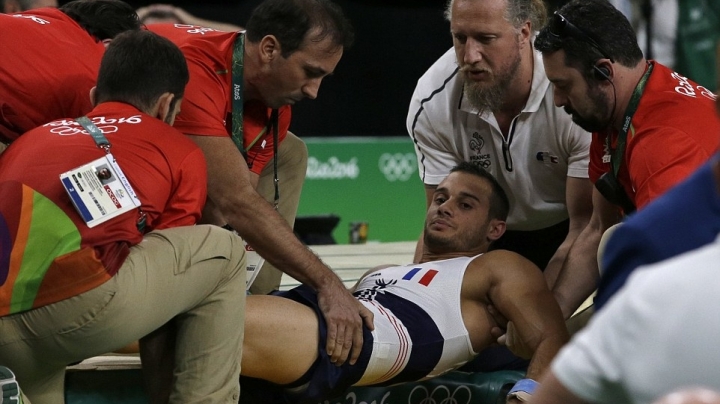 This is the horrendous moment a French gymnast's Olympics were ended in a single moment after he severely broke his left leg while landing on a vault, reports Daily Mail.

Samir Ait Said's leg snapped as he tried to complete his vault during team preliminaries on Saturday, with the sound of the injury echoing through the arena.

As he crumpled to the floor, Said writhed in agony while medical officials tended to him in front of a shocked crowd.

After a delay of several minutes, he was eventually wheeled out and raised one arm to acknowledge the loud ovation he received from the crowd.

Several viewers watching on television took to social media to express their shock after the incident was broadcast live, with many detailing the loudness of the 'crack'.

The injury means Said will leave the Olympics prematurely, having also been expected to compete in the men's parallel bars, the individual all-round, the team all-round, floor exercise, rings and the pommel horse.

The 26-year-old, who competed at 2015's World Championships in Glasgow, won gold on the rings at 2013's European Championships and then silver in the same discipline in 2015.

Toba abandoned his routine and was helped off by trainers but managed to compete on pommel horse before exiting to receive medical attention.