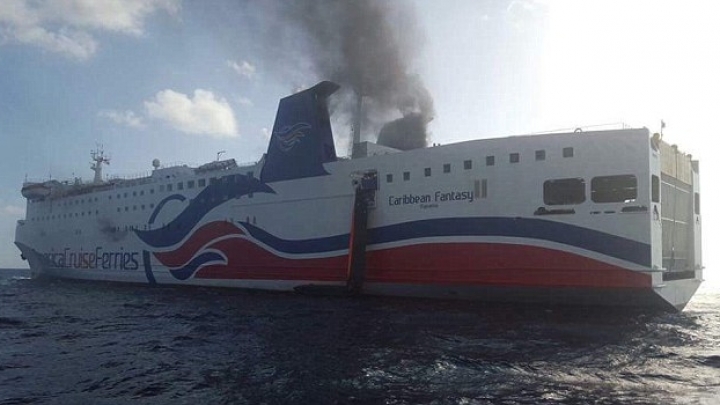 Emergency crews have scrambled to save hundreds of passengers trapped aboard a burning ferry a mile off the coast of Puerto Rico, reports Daily Mail.

A blaze was reported in the engine room aboard the car and passenger ferry Caribbean Fantasy at 7.42am which had 512 passengers and crew on board.  United States Coast Guard workers were scrambled to the scene to help passengers and crew evacuate, with no reports of injuries yet and nobody missing.

As of late Wednesday morning there were only around 50 people left on board, with Puerto Rican authorities helping to evacuate them.  The evacuated passengers are being taken to Pier 6 in San Juan, where an emergency response center has been established.

A mechanical fault could be to blame for the fire, according to Primahora.com, which broke out as the ferry was making its way out of the port of San Juan.

Pictures of the boat taken from shore in Palo Seco, Toa Baja, show smoke streaming from the back of it.

Angel Crespo, the head of Puerto Rico's disaster response agency, had been trying to plot a safe route to harbor for the vessel, but those efforts were abandoned.

The Caribbean Fantasy is operated by America Cruise Ferries and offers 12-hour overnight trips between San Domingo in the Dominican Republic and San Juan, Puerto Rico.

The ship was built in Japan in the late eighties, according to an advert on Directferries.com, and is capable of holding up to 1,000 people and 60 cars.

The site promises 'a fun-filled, entertaining, cruise-like experience' on board, which is equipped with a bar and evening entertainment lounge.