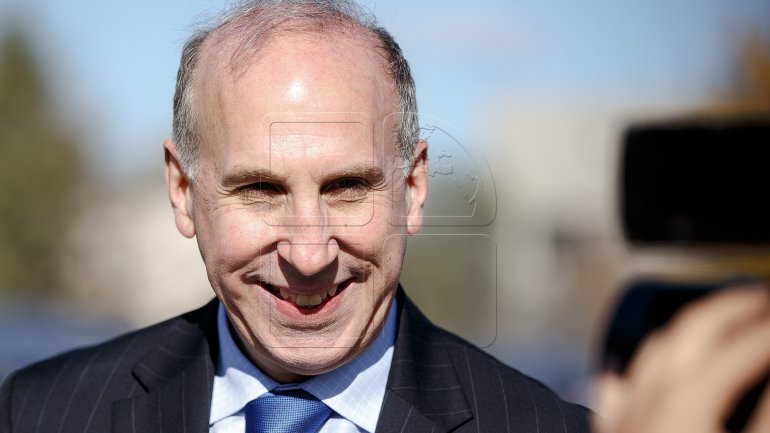 The first season of "A Day" show at Prime channel has highlighted an exceptional edition. The US ambassador to Chisinau, James Pettit has accepted to be followed around by journalists. The journalist Cristian Tabara found out how the ambassador spends his mornings and his daily activities in Chisinau.

James Pettit starts his day early in the morning. Although it's still dark outside, the US ambassador, accompanied by Marines from the US Navy, does his morning jog.

"I like to run, because it is very beneficial for health. And everybody's health is very important" , said the ambassador.

The journalist attended the daily planning meeting in the US embassy, then chatted with the diplomat. James Pettit told him that his wife is also an US ambassador, but in Latvia:

"It's a bit difficult to be together. Both holidays, Christmas and New Year, I will spend alone. It is a sacrifice that we often make."

Together the two held in a meeting with foreign investors. After that they visited a school in Budesti village, where he attended a health lesson taught by a Peace Corps volunteer.

The ambassador said he visits all the activities supported by the embassy. On the way to another destination, Pettit spilled the beans on what he thinks about our country:

"Moldova is very poor in the economic sense, but has a very rich potential. People need desire not to lose hope in the future of this country".

Subsequently, Cristian Tabara and James Pettit visited the first robotics club opened in Moldova with the help of the US.

The day ended at a Christmas and Hanuka reception.

The whole version of the "A Day" episode with James Pettit can be reviewed on Sunday at 12:15 on Prime channel.
AFLĂ imediat Știrile Publika.MD. Intră pe Telegram