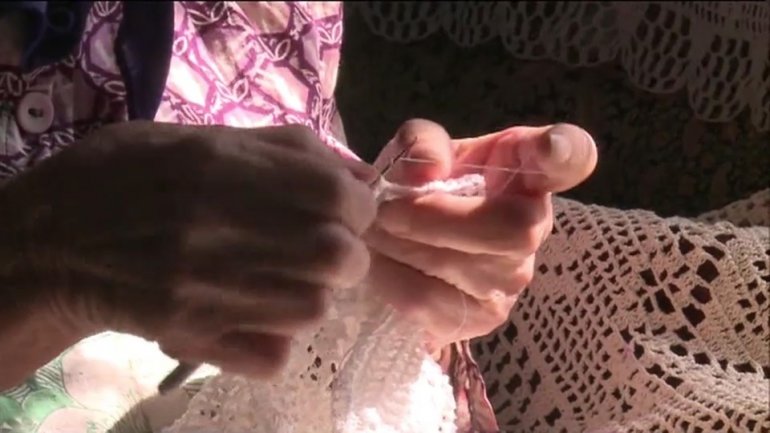 She has mastered sewing despite hand not listening much anymore and eyesight failing her. The 96-year-old elderly from Costuleni village, Ungheni district, has consecrated most of her life to sewing and despite her age, cannot seem to give up her passion. The woman is creating true masterpieces, but not for selling them, but gifting to beloved ones.

It is already 83 years since the elderly first begun sewing, since then never giving it up.

“It used to be a trend and so I began doing it” Vera Ciubotaru said.

Despite her health issue, the old woman claims that she can never give up this occupation.

“It is hard, as I can barely see. I cannot stay still or simply lay down”, Vera Ciubotaru declared.

Her biggest happiness is to receive a bobbin and thread.

“Her thread finished and she was so sad. But I had some to spare. I still claim to have none left and that I have to go purchase some. I came one morning with the gift and it made her so happy to be able to work again” her niece, Elena Chirinciuc confirmed.

Usually all her masterpieces are given as gifts to her relatives.

“She made us many of her works, table covers and even bags where we can put vegetables, potatoes, onions, garlic. Afterward coming and asking what else we need” her nephew Petru Chirinciuc said.

Her relatives are thankful for the care and attention she bears them for years.

“She cares for us deeply and helped often. We all build a home together, one made of clay and muck” nephew Ion Chirinciuc said.

“My great-grandmother is an active woman. Whenever I visit her, she works. I sometimes come by and help her, or learn something myself” her great-nice Andreea Apostol said.

Vera Ciubotaru has 10 nieces and nephews and 18 grand- niece and grand-nephews.