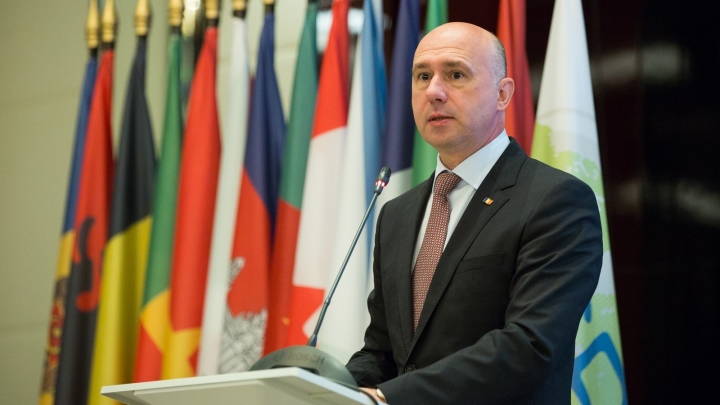 Prime minister Pavel Filip attended the opening session of the 8th Conference of heads of institutions of the Association of Francophone Constitutional Courts. The event was organized for the first time in Chisinau.

At the conference participated the president of Moldova, Nicolae Timofti, president of Constitutional Court, Alexandru Tanase, and presidents and judges of over 30 constitutional courts and representative of the Venice Commission.

In his speech, the prime minister has welcomed the presence of specialists in the constitutional jurisdiction field in Chisinau. Pavel Filip mentioned that this event is a good opportunity for approaching subjects of interest for the francophone society, and to intensify the cooperation of profile institution on four continents.

“The constitutional courts are watching so that the laws in a constitutional state will be applied equally for all, and the juridical systems to function according to the requests of the social justice. This fundamental role becomes more important in young democracies” declared Pavel Filip.

At the same time, the head of Executive said that the strengthening of the constitutional state, the assurance of the supremacy of the law and compliance of the human dignity are vital for our country. Also, the prime minister said that the role of the Constitutional Court is very important in fulfillment of these values.

“The recent history of the country shows that in situations of political and social uncertainty, the Court was often the decisive factor for the maintenance of the political and legislative action in the limits of the Constitution. We witnessed for many times then the Court has raised itself over the calculations of the politics, ending the crises of various format and inspiration” said the prime minister Pavel Filip.