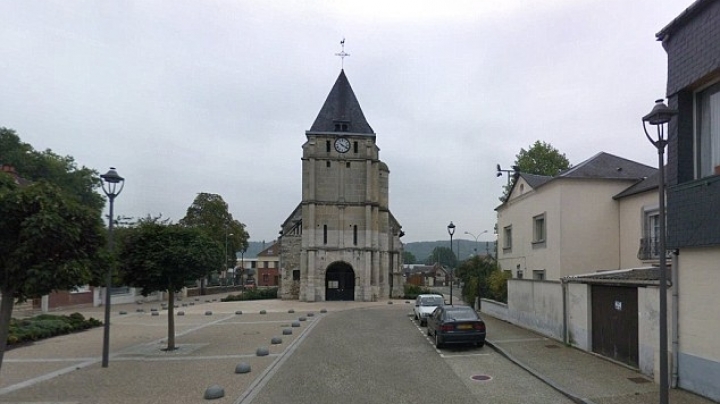 An 86-year-old priest has been butchered by two 'Islamic' knifemen who cut his throat after bursting into a French church and taking nuns and worshippers hostage before being shot dead by police, reports Daily Mail.

Five people including the priest, two nuns and two parishioners were held by assailants who raided the church in Saint-Etienne-du-Rouvray, near the city of Rouen in Normandy at 9am.

The clergyman was knifed to death during the attack while another hostage is fighting for their life in hosptial. The two attackers have been 'neutralised' by elite marksmen in a dramatic police operation.

At least one of the men was dressed in Islamic clothing, according to French media reports, and an anti-terrorist unit has already taken up the investigation.

Footage from the scene shows emergency crews, including elite police squads, arriving at the Church of the Gambetta and one person being stretchered into an ambulance.

The clergyman, named locally as Jacques Hamel, ordained in 1958, had his throat cut, said a spokesman for the Interior Ministry in Paris.

The siege officially ended at around 11am, following the shooting of the two attackers.

Units attending including the elite RAID, the anti-terrorist unit that was heavily involved in the Paris attacks last year, in which almost 150 people were murdered.

French Prime Minister Manuel Valls tweeted that he was 'horrified at the barbaric attack' adding: 'All France and all Catholics are bruised.'

The Vatican has condemned the 'barbarous' killing which it said was even more heinous because it happened in a 'sacred' place. The Archbishop of Canterbury Just Welby urged people to 'pray for France, for victims, for their communities'.

A number of shots were heard over a period of around 15 seconds as the incident came to an end.

The area around the church remained cordoned off and the old town was out of bounds.