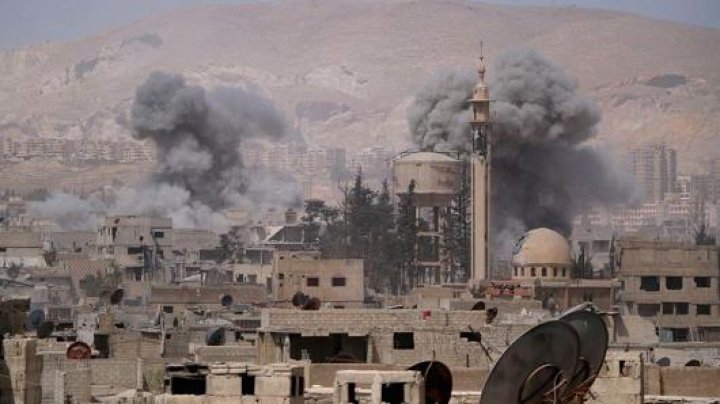 At least 70 people have died in a suspected chemical attack in Douma, the last rebel-held town in Syria's Eastern Ghouta, rescuers and medics say.

A chemical attack on a rebel-held town in eastern Ghouta has killed dozens of people, medical services reported, and Washington said the reports - if confirmed - would demand an immediate international response.

A joint statement by the medical relief organization Syrian American Medical Society (SAMS) and the civil defense service, which operates in rebel-held areas, said 49 people had died in the attack late on Saturday. Others put the toll at 150 or more.

The Russian-backed Syrian state denied government forces had launched any chemical attack as the reports began circulating and said the rebels were collapsing and fabricating news.

Reuters could not independently verify the reports.

The lifeless bodies of around a dozen children, women and men, some of them with foam at the mouth, were shown in one video circulated by activists. “Douma city, April 7 ... there is a strong smell here,” a voice can be heard saying.

The U.S. State Department said reports of mass casualties from the attack were “horrifying” and would, if confirmed, “demand an immediate response by the international community”.

Britain’s Foreign Office also called the reports, if confirmed, “very concerning” and said “an urgent investigation is needed and the international community must respond. We call on the Assad regime and its backers, Russia and Iran, to stop the violence against innocent civilians.”

Russia, however, dismissed the reports. “We decidedly refute this information,” Major-General Yuri Yevtushenko, head of the Russian peace and reconciliation center in Syria, was cited as saying by Interfax news service.