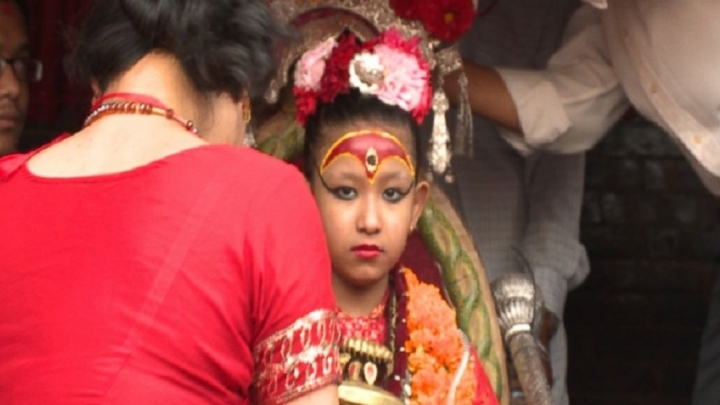 A seven-year-old girl in Nepal was selected to be a living and breathing goddess when she was just a toddler due to having 'eyelashes like a cow' and a 'voice as clear as a duck' , DailyMail informs.

The goddess or Kumari continues the centuries-old tradition of child deities living among mortals in Nepal where she is worshiped by Hindus and Buddhists alike.

At the Hindu festival of rain in July thousands came to pay their respects to the child including the Prime Minister of Nepal, Pushpa Kamal Dahal, who had to bow and scrape to the child when the pair met.

Despite her lofty status the seven-year-old, who is called Yunika and is said give good luck to all those who lay their eyes on her, still lives with her parents.

The girl's parents left their jobs in the town of Patan to become full-time carers to their daughter which has proven to be a tricky task as the Kumari are not permitted to leave their homes, except for special occasions, and her feet are never allowed to touch the floor.

Yunika's mother has become something of a make-up artist having to apply unique patterns on her face that mark her out as goddess among mere men.

'I feel little sad that other children play outside, but her friends do come to play with her inside. Whatever she demands, dolls or any plaything, we fulfill her demands' her mother Sabita said.

She will also be tested for signs of fearlessness and serenity before she is adorned with the title.

Once a girl is chosen, she is considered an incarnation of the Hindu goddess Durga.