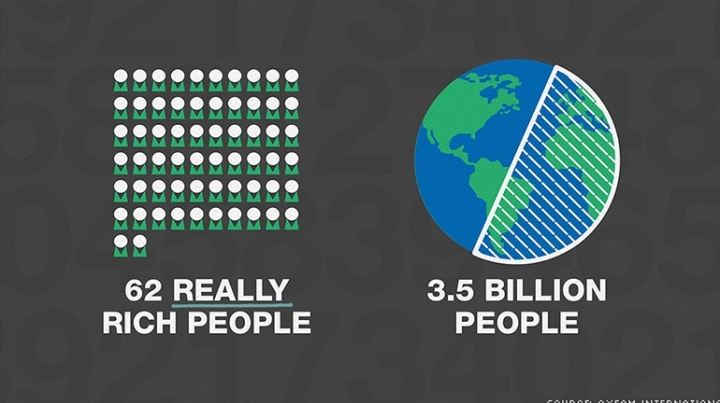 The world's 62 richest billionaires have as much wealth as the bottom half of the world's population, according to a new report from Oxfam International.

The wealthiest have seen their net worth soar over the five years ending in 2015. Back in 2010, it took 388 mega-rich people to own as much as half the world.

And the Top 1% own more than everyone else combined -- a milestone reached in 2015, a year earlier than Oxfam had predicted.

Oxfam released its annual report ahead of the World Economic Forum in the Swiss city of Davos, a yearly gathering of political and financial leaders. The study draws from the Forbes annual list of billionaires and Credit Suisse's Global Wealth Databook.

The anti-poverty group, whose leader co-chaired the forum last year, wants to call even more attention to the widening wealth divide. The top 62 saw their net worth rise by more half a trillion dollars between 2010 and 2015, while the 3.6 billion people in the bottom half of the heap lost a trillion dollars.