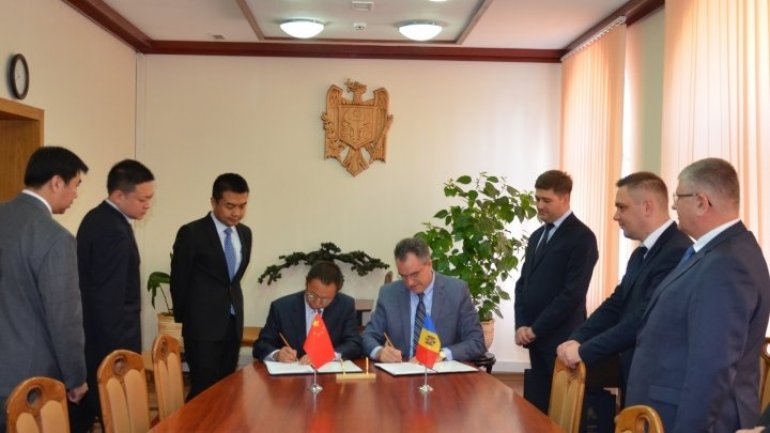 The scanning equipment is donated by the Chinese Government. Condition regarding delivery, installation and usage is included in the contract signed by Customs Director General Vitalie Vrabie and Economic and Commercial Counselor of the Chinese Embassy in Moldova Xuejun Song.

The signing took place in the context of the visit to the Republic of Moldova of the representatives of the International Center for Economic and Technical Exchanges of China, of the general contractor and of the producing company.

According to the agreements, the scanning equipment destined for the capital city airport is to be installed by the end of this year and the construction of the railway vehicle inspection system for Ocniţa 1 (railway) customs post is scheduled for the first semester of 2018.

The cost of the project is $ 5.7 million. Thus, the Republic of Moldova becomes the first country in the region to have such high performance control technologies, provided for non-destructive inspection operations.

During the talks, Customs Director General Vitalie Vrabie thanked the Chinese partners for consistent support to develop the institutional capacities of the Service
Customs. "The modernization of the customs stations and their endowment with efficient control equipment represents practically indispensable actions for ensuring the economic security of the state.

However, in general, the final beneficiaries of this assistance project are not only the Republic of Moldova and its citizens, but also the states in the region, through the non-admission of crossing the customs border contraband goods, restricted or prohibited. ", Vitalie Vrabie concluded.

In reply, China Economic and Trade Counselor's Adviser to Moldova, Xuejun Song expressed his conviction that the cooperation relations established with the Customs Service will continue to advance by launching new assistance projects. Xuejun Song also pointed out the contribution the institution has in the field of economic assurance of the state, mentioning, in this context, the progress achieved by the Customs Service on several segments of responsibility.

It is to be remembered that, initially, the Chinese government' s willingness to finance the procurement and installation of such equipment was announced by the Chinese Ambassador Extraordinary and Plenipotentiary in Moldova, E.S. Zhang Yinghong, during a meeting with Vitalie Vrabie.