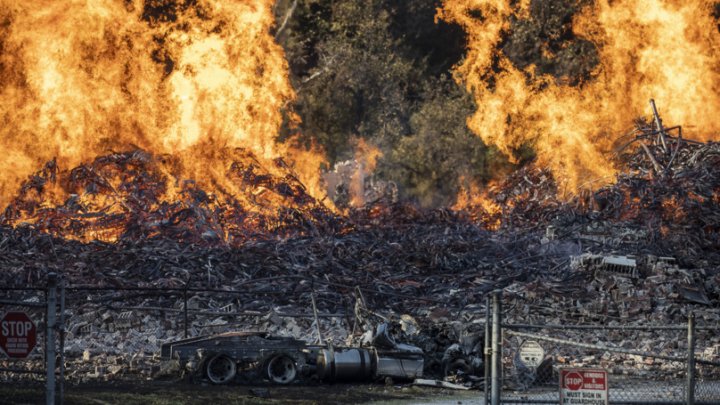 Jim Beam is a staple bourbon whiskey seen in plenty of pubs, bars and clubs across the world. Some people absolutely hate it and others would have it every day if they could, reports LadBible.

Well, if you're in that latter half then you might want to look away because you'll be seeing your precious liquid going up in flames. A warehouse in Kentucky, which contained around 45,000 barrels of the good stuff, has erupted in an inferno.

Firefighters have been working around the clock to try and stop the fire, including using water, flame retardant foam and even sand to limit its spread.

Chandler says the bourbon is unfortunately providing the fire with the perfect material to continue raging and they're trying to prevent bourbon and other liquids from running off into the Kentucky River.

Jim Beam's parent company, Beam Suntory, said in a statement: "We are thankful that no one was injured in this incident, and we are grateful to the courageous firefighters from multiple jurisdictions who brought the fire under control and prevented it from spreading.

"We have a comprehensive warehouse safety programme that includes regular inspections and rigorous protocols to promote safety and the security of our ageing inventory."

Now if you're worried that your local might run out of Jim Beam because of the incident, fear not. There are 126 Jim Beam warehouses in Kentucky that hold 3.3 million barrels of the amber spirit - so there's plenty more to go around.

But the reason they're kept in barrels in warehouses for so long is because it's essential to the aging process to get that Jim Beam taste. Let's hope this warehouse wasn't containing any really good stuff.

Lightning was the cause of a virtually identical fire at a Kentucky Jim Beam warehouse in 2015. Around 800,000 gallons of alcohol was destroyed in the blaze, according to the Independent, but luckily no one was injured.

The nearby creek became contaminated by the incident, leading to many fish being killed. It cost Jim Beam around $27,000 to clean up the whole mess but luckily there wasn't a stoppage to the bourbon being distributed around the world.