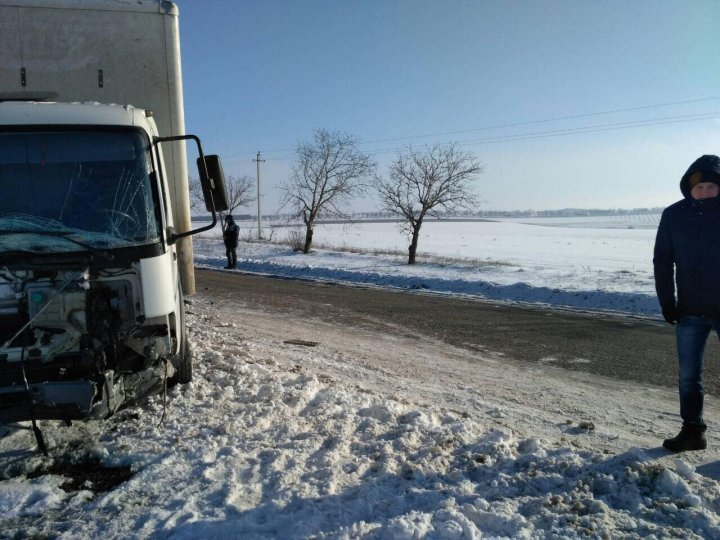 4 Postal Delivery Officers were killed after a grave accident between post office car and a truck near the Mihăileni village, Râşcani district this morning.
Vaz model car of post office was running at excessive speed, the driver then lost control of the steering wheel, hit the truck and overturned.
Among those who lost their lives counted the driver of Vaz model car, 64, and one of the passengers, 35, from Râşcani town and another two passengers of 24 and 34, from Răcăria village.
"There are two traces left behind the accident. The car lost control from the back, when it was on ice and then started driving against the traffic", Râşcani Police Inspector, Vasile Pântea said.
The four employees of Poşta Moldovei were going from Râşcani town to Mihăileni village. Behind them was another company car. Their colleagues have seen the accident.
"They rolled over, straightened and started driving against the traffic" chief of the Postal Delivery Service said.
Luckily, the truck driver was only injured, at the moment his life is in no danger.
"I was driving properly, but that car started rolling around and drove toward me, and that's all. Perhaps if he was not speeding it would not have turned out this way" truck driver Mihail Adochiţii said.
Friends and relatives of the victims arrived on site.
"I'm a father, my son died. Andruşceac Andrei, born in 1983, working at the post office. It's a tragedy, I do not what to do next, how to live on" the victim's father said.
"We came as soon as we found out what happened. -Do you know them? -Yes. -Those who passed away? -Yes, one of the men", a victim's friend said.
Poşta Moldovei declared a day of mourning in the company. All offices will hold a minute of silence at 18:00. The accident was a true tragedy for Răcăria village.
The 34-year-old man is the son of the local school's director and left behind a 2-year-old boy.
"He was a good person. We mourn him, we heard of it at 10:30 and started crying. He never refused to help anyone, was always willing to help whoever asked. A very good man."
Another 24-year-old passenger was the son of the PE teacher, also from the school from Răcăria.
"He was not married, young, handsome, had a future ahead of him, but now, he must be buried by his father."
According to the local City Hall, the victims' families will each receive 5 000 lei from the City Hall and another 10 000 lei from Râşcani Regional Council.
Another accident that resulted in the death of 5 people, among whom counted a one year and five months old little girl and her 22-year-old father, took place in Todireşti village, Anenii Noi district. The child's mother survive and is currently in critical condition. She woke up form her coma, but is still kept in the intensive care unit. The other 23-year-old woman has required another surgery and is currently in the traumatology unit. The tragedy took place after the driver of an Audi car has performed a dangerous turn, without making sure that it was safe.
AFLĂ imediat Știrile Publika.MD. Intră pe Telegram