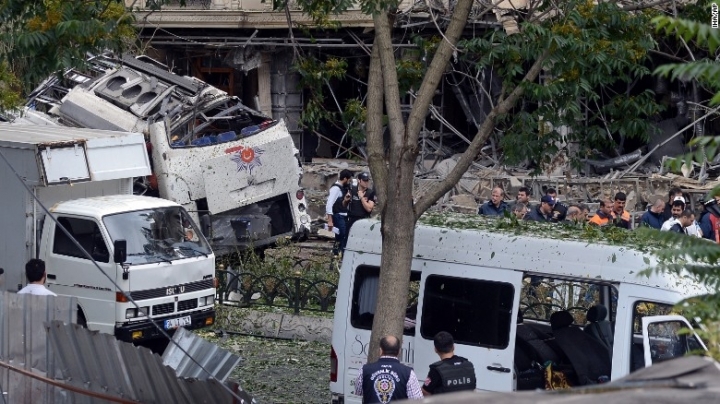 According to CNN, four people have been detained in connection with a car bomb attack targeting a police bus that killed 11 people Tuesday in Istanbul, Turkey's state-run Anadolu agency reported, citing police officials.

The blast, in the Beyazit neighborhood of Istanbul's historic Fatih district, occurred about 8.40 a.m. local time during morning rush hour.

It killed seven police officers and four civilians, and left 36 people injured, three of them critically, Istanbul Gov. Vasip Sahin told reporters.
No one immediately claimed responsibility for the bombing. Turkey has been rocked by a string of terror attacks over the past year.
Local media reported that the blast was remotely detonated as the bus, carrying a group of riot police, passed. No group has taken responsibility for the bombing.
The area surrounding the explosion -a busy neighborhood that includes the city's landmark Beyazit Square, the main Istanbul University campus and the Vezneciler metro station - was evacuated following the blast.
Images from the site of the explosion showed visible damage to surrounding buildings, with windows blown out and glass strewn across the street.
The United States, France and Germany were quick to condemn the attack, with French President Francois Hollande saying in a statement that "this intolerable act of violence must more than ever confirm our mutual determination to fight all forms of terrorism."
The U.S. Embassy in Turkey said on Twitter that it would "continue to stand shoulder-to-shoulder with Turkey in the fight against terrorism."
Turkey has been rocked by a string of terror attacks over the past year as it weathers bombing campaigns carried out both by ISIS and Kurdish militants.
The violence has had an impact on Turkey's tourism industry, a key sector of the national economy.
AFLĂ imediat Știrile Publika.MD. Intră pe Telegram