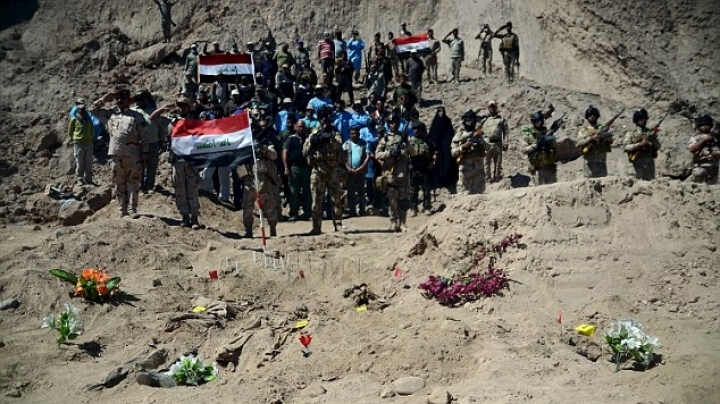 Dozens of ISIS fanatics involved in the massacre of 1,700 Iraqi army recruits have been hanged in front of their victims' relatives, reports Daily Mail.

The 36 jihadists had been found guilty of involvement in the 'Speicher' massacre, named after a base near Tikrit in Iraq where the recruits were kidnapped before being butchered by terrorists.

Officials say relatives of some of the extremists' victims attended the mass hanging at Nasiriyah prison.

The soldiers were trying to flee from nearby Camp Speicher, a former US base just outside the northern city.

Shortly after taking Tikrit, ISIS posted graphic images of gunmen shooting the men dead after forcing them to lie face down in a shallow ditch.

The Speicher massacre sparked outrage across Iraq and partially fueled the mobilisation of Shiite militias in the fight against ISIS, a Sunni extremist group. The militias now rival the power of Iraq's conventional armed forces.

Iraqi forces arrested dozens of men allegedly linked to the massacre after retaking Tikrit in 2015 with the help of US-led airstrikes.

The men executed on Sunday were sentenced to death by an Iraqi court earlier this year.

Following the death of more than 300 people in the worst ever single bomb attack to strike Baghdad last month, Prime Minister Haider al-Abadi had said he wanted to expedite the execution of inmates sentenced to death in terrorism cases.

A Dhiqar governor confirmed to AFP that the executions were carried out by hanging.

His spokesman said that around 400 of the Speicher massacre victims were from the Dhiqar province, which is predominantly Shiite and located in Iraq's south.