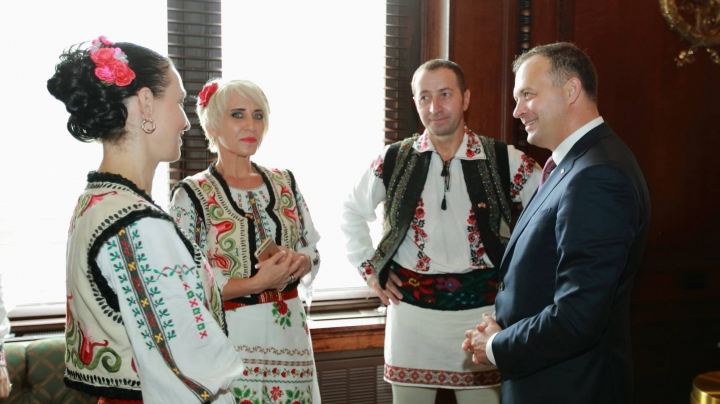 Parliament President Andrian Candu together with the Moldovan Embassy in the US, hosted a reception in Washington on the occasion of 25th anniversary of Moldova's independence.

The event was held at the US Library of Congress in the presence of government officials, prominent politicians of American and national Diaspora representatives.

In greeting the participants in the event, Andrian Candu said that the 25 years of Moldova's independence were marked by many challenges, and overcoming them took time and effort.

"Those 25 years were not always what we wanted - there were many changes that have occurred sometimes too suddenly, and we have not always known to answer as firm and dignified as did promoters independence struggle. In retrospect, since independence day until today, we must recognize that the transformation of Moldova took longer and that there is no quick recipe for success" , said Speaker.

However, Andrian Candu said that at present, Moldova has a well-defined project - the objective of European integration is irreversible.

"Like a quarter of century ago, we embarked on a new journey. We have a clear choice - political association and economic integration in the European Union" ,  said Speaker of Parliament.

Speaker expressed gratitude for US support and assistance given to Moldova over time strengthening the rule of law and modernization projects of the country.

"In this quarter century, the US stood behind our democratic reform and EU integration, supporting our efforts to strengthen a young nation that aspires to take its rightful place among the democratic nations" , said Andrian Candu.

In turn, Deputy Assistant Secretary, Bridget Brink welcomed the reforms which the Chisinau government undertook and urged the ruling coalition to continue to implement reforms beneficial for citizens.

"US supports the progress made by the Republic of Moldova. During the 25th independence Moldova has made efforts to become a country more prosperous and more democratic for the citizens. We welcome the positive actions of the government in Chisinau and launched reforms to ensure Republic Moldova a European future" , said Bridget Brink.

And Congressmen David Price and Joseph Pitts have sent messages of support for Moldova.

Accompanied by Deputy Assistant Defense Department, Michael Carpenter praised the exemplary participation of Moldovan soldiers in peacekeeping missions, stressing the support of US studies and organizing training courses for engineers and engineers.

And former US Ambassador to Moldova, Pamela Smith attended the reception, saying a congratulatory message to Moldovan citizens, spoken in Romanian.

The festive atmosphere of the event was complemented by a folk group consisting of Moldovans living abroad, who decided to live in the US, which gave the visitors a spectacle of American folk songs and dances.