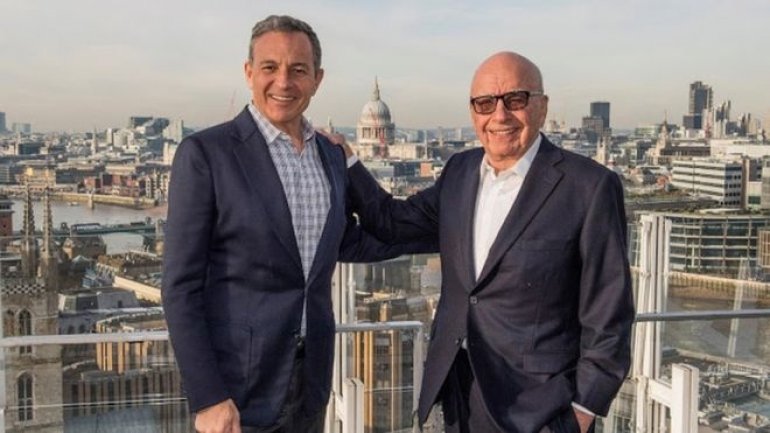 Much of Fox's remaining assets, including Fox News and Sports, will form a new company.

The deal ends more than half a century of media expansion by Fox owner Rupert Murdoch, who is 86 years old.

He turned a single Australian newspaper he inherited from his father at the age of 21 into one of the world's largest news and film empires.

Mr Murdoch said the transaction makes sense in a media industry undergoing seismic shifts due to online advertising and competitors who are streaming entertainment into homes via the internet.

"With today's announcement, we launch the next great leg of our journey," Rupert Murdoch said on Thursday.

"We are paving the way for the new Fox and a transformed Disney to chart a course across a broad frontier of opportunity."

Disney chief executive Bob Iger said that Disney was "incredibly excited" about the acquisition, and that it was an "opportunity to expand iconic franchises", including Avatar and Star Wars.

"May the Force be with us all," Mr Iger said.

Disney will scoop up Fox's movie and television studios, regional sports network and international holdings, among other investments.

The move adds to Disney's back catalog high-grossing films such as the original Star Wars movies, the Marvel superhero pictures, Avatar and Deadpool, as well as TV hits such as Modern Family and The Simpsons.

It expands Disney's offerings with the FX and National Geographic cable channels, and Fox's regional sports network in the US.

Disney will also get majority control of the video streaming service Hulu, which is also partially owned by Comcast and Time Warner.

Disney will assume $13.7bn in Fox debt as part of the stock deal, taking the total value of the transaction to more than $66bn.

Disney already owns a vast array of news, film and leisure companies. But the media landscape is changing as technology companies like Amazon and Netflix attract customers to new ways of viewing.

Disney is investing heavily in online streaming platforms, as a way to counter a downturn in its pay-TV business and threats from these new rivals.

The firm believes this deal will give it the scale to compete, and expects to wring "at least" $2bn in cost-savings out of the new company to boot.

Fox is creating a smaller firm focused on news and major live sports events in the US.

As part of the deal Fox shareholders will receive Disney stock, representing about 25% of the enlarged company.