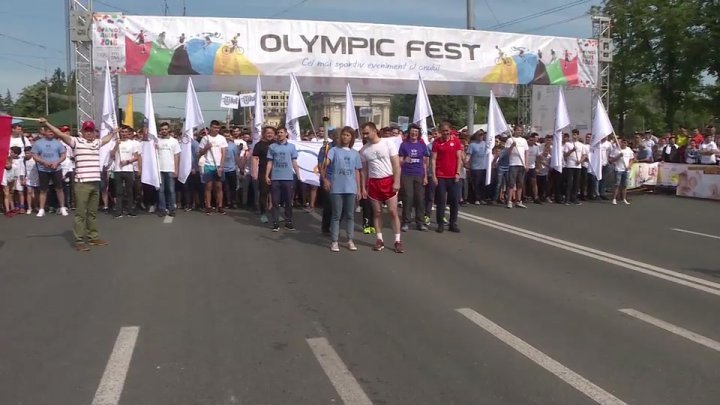 They ran and played football, volleyball, table tennis or handball. They say the event was a good opportunity to do exercise.

In the three-kilometer race, both children and older men were enrolled. Ion Ojog is 65 years old and has attended the event the fifth time.

"Sports is life, and every year there are more and more people realize the importance of sports, "said Ion Ojog, a physical education teacher.

Among those enjoy the race was the Minister of Education, Culture and Research, Monica Babuc and the State Secretary Radu Rebeja, who came with his family.

"It's the day of the sport and of course with the whole family at the feast. The two-week-old boys are already preparing," said Radu Rebeja, State Secretary of the Ministry of Education, Culture and Research.

"My training is still very good, so I invite everyone to participate in the Olympic Fest and enjoy this wonderful spring day," said Monica Babuc, Minister of Education, Culture and Research.

The day ended with a cheerful start contest where journalists from seven televisions competed. The Publika TV team ranked third. Journalists were the best at the asphalt skis.

"Today we have a team of editors, reporters, producers from all fields and we have shown that we can work not only in our professions", said Tudor Ioniţă, external editor, team leader.

Olympic Fest was organized by the National Olympic and Sports Committee, the Ministry of Education, Culture and Research and the Chisinau City Hall. And the foundation of Vlad Plahotniuc Edelweiss provided support in the organization process.