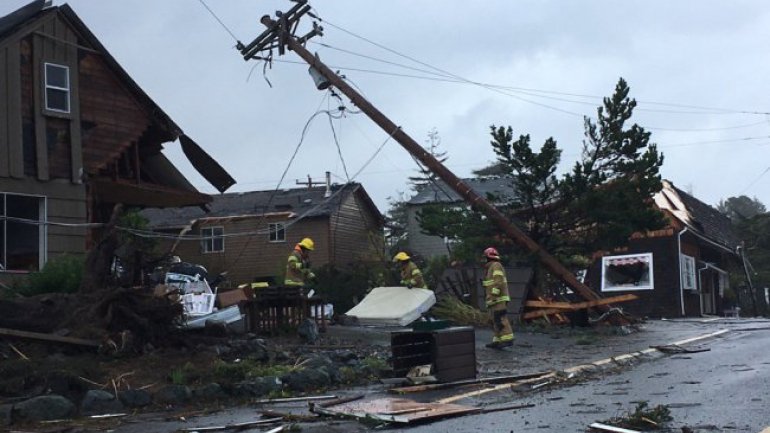 The remnants of a typhoon slammed the Pacific Northwest coast on Friday, spinning off two tornadoes in Oregon and forcing the rescue of 46 people in northwest Washington, reports CNN.

Even stronger storms are forecast for Saturday, with Seattle being a likely target.

The group was stranded at their camp without power and was blocked in by falling trees. The Coast Guard deployed a 29-foot rescue boat that holds seven passengers to take them to safety.

The National Weather Service confirmed two tornadoes touched down in the northwest Oregon coastal cities of Manzanita and Oceanside.

First responders searched the Mazanita area but have not found anyone trapped under the debris. Though a Red Cross shelter has been opened at a local church for anyone displaced, residents are urged to shelter in place because more storms are expected in the area.

The National Weather Service said the last time two tornadoes touched down the same day in NW Oregon was November 12, 1991, when three were reported.

The weather service's Portland office said it broke its record for the most tornado warnings in a day, issuing 10 on Friday.

The National Weather Service in Seattle said the Friday storms were part of a one-two punch.

The second storm, the stronger of the two, will pack the remnants of Typhoon Songda and strike the Pacific Northwest on Saturday with intense wind and rain.

There is growing consensus that the Saturday storm will move over Washington, according to the weather service.

If the storm crosses directly over or near western Washington, "this would be a worst-case scenario leading to a historical and destructive windstorm for the area," it warned earlier this week.

The winds from the second storm are likely to be fierce and widespread, according to CNN Weather.

Seattle began hunkering down for the double barrel of storms by shutting its parks, preparing emergency resources and opening more slots at its homeless shelters.

The possibility that the Saturday storm could be "one of the severest weather events that we've ever had has caused us to step up our response significantly," said Seattle Mayor Ed Murray in a news conference Thursday.

Saturday's storm is expected to drench the West Coast from Washington down to northern California. It could pose dangers including fallen trees, downed wires, power outages and floods.

The storms could produce high seas potentially reaching 30 feet or higher, and coastal flooding along areas of Washington, according to CNN Weather.