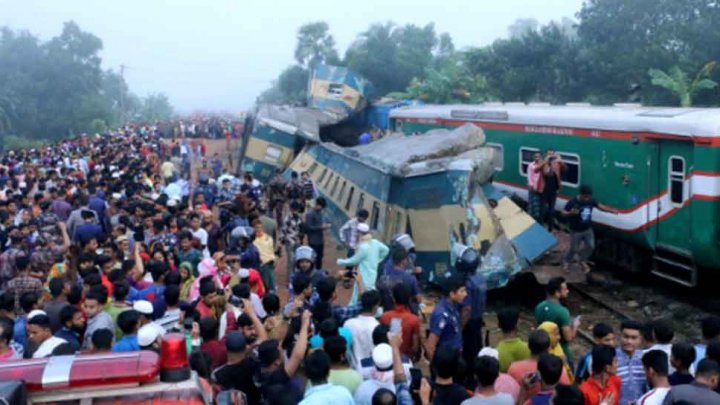 At least 16 people were killed and several others sustained injuries when two passenger trains collided head-on in Bangladesh's Brahmanbaria district on Tuesday. Rescuers in Bangladesh were struggling to pull passengers from mangled wreckage after a head-on collision of two trains which happened around 3 am.

Reportedly, Udayan Express which was heading towards the southern port city of Chittagong and one bound for Dhaka collided at Mondobhag Railway Station in Brahmanbaria, crumpling three compartments of the train. The accident place is about 100 km (60 miles) east of the capital.

A 50-year-old passenger Mohammad Moslem told Reuters, ''When I came out of the train, I saw dead bodies without heads, without legs, without hands.''

The reason for the accident is not clear and the government has ordered an investigation. Meanwhile, the rescue operation is underway, writes zeenews.

There are frequent railway accidents reported in Bangladesh mainly at unsupervised crossings. The reason is assumed to be the poor condition of tracks.