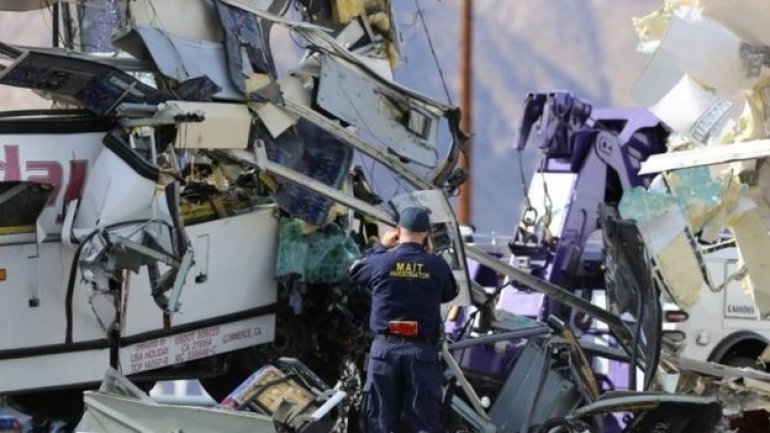 Thirteen people have been killed and more than 30 injured in southern California after a tour bus ran into the back of a lorry, reports BBC.

Most of the passengers are reported to be from Latin America.

The crash happened on Interstate 10 close to the resort town of Palm Springs in the early hours of Sunday morning.

Investigators are examining the cause of the crash, which happened as the bus was bound for Los Angeles.

Rescuers used ladders to climb into the bus windows to remove bodies. Five of the injured passengers are in critical condition.

The Los Angeles Times described the crash as the deadliest in California for several decades. It said that the bus careered into the rear of the truck at high speed, mangling the front third of the bus.

Most of those who died were apparently at the front of the bus, the newspaper reported. The driver was among the fatalities.

Officials quoted by the paper said that identifying the victims could take days, because some were not carrying identity cards or had lost their belongings when they were taken to hospital.

They have warned that it may not be possible to determine exactly why the accident happened because of the driver's death.

Investigators will assess whether he might have fallen asleep or had a heart attack, in addition to determining if there was a mechanical failure or some other kind of emergency.

The westbound lanes of the interstate were closed near the crash site but are now reported to have been reopened.

According to the Desert Sun newspaper, the tour bus, run by US Holiday, was coming from Red Earth Casino, near Salton City in California.

The small Los Angeles-based company, runs trips to casinos in California and Las Vegas. The driver of the bus was one of the owners of the tour company.

The Federal Motor Carrier Safety Administration records show the company had one vehicle and one driver. According to the data the company held a satisfactory safety rating and had not been in a crash for two years.