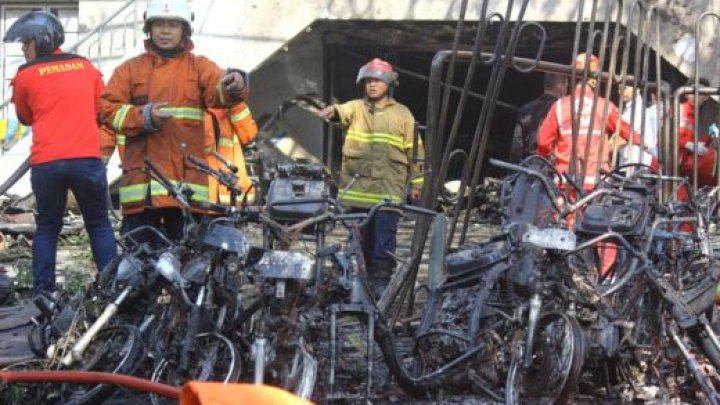 Members of one family were behind a wave of blasts targeting three churches in Indonesia's second city of Surabaya, police say.

Around 40 others were injured in the attacks, which occurred within minutes of each other. No group has so far said it carried them out.

TV pictures showed debris scattered around the entrance of one church.

Indonesia, the most populous Muslim-majority country, has seen a resurgence of Islamist militancy in recent months.

The bombings took place at around 07:30 local time (00:30 GMT). Unconfirmed reports say one of the attackers was a woman who entered a church with children.

Wawan Purwanto, of Indonesia's intelligence agency, said the Islamic State-inspired group, Jemaah Ansharut Daulah (JAD), was suspected to be behind the attacks.

He added that the bombings were likely to be linked to an incident earlier this month, when five members of the security forces were killed during a 36-hour standoff with militant Islamist prisoners at a high security prison on the outskirts of the capital Jakarta.

Separately, police said they had killed four suspected members of JAD in Cianjur, West Java, to the south of Jakarta.

Sunday's attack is the deadliest since 2005, when three suicide bombings on the resort island of Bali killed 20 people.

More than 90% of Indonesians are Muslim, but there are also significant populations of Christians, Hindus and Buddhists. Christian leaders urged calm. "We don't need to be afraid when facing terror threats. We must leave it completely to the government to handle," the head of the Indonesian Communion of Churches said in a statement on Sunday quoted by The Jakarta Post. Indonesia's Foreign Minister Retno Marsudi condemned the attack and sent her condolences to the victims and their families.
AFLĂ imediat Știrile Publika.MD. Intră pe Telegram