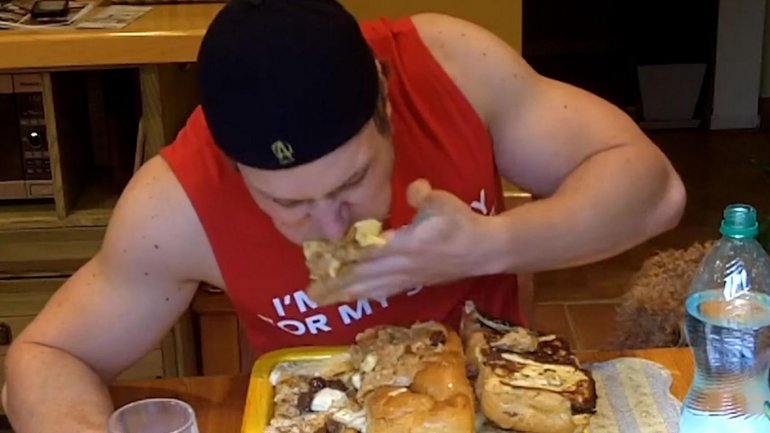 YouTubers are challenging themselves to eat 10,000 calories in a single day in a bid to impress their fans - and the task is proving harder than it might seem, Independent informs.

As the name suggests, the challenge involves scoffing at least 10,000 calories in the space of a day, about 8,000 calories more than the recommended daily amount of 2,000 for women and 2,500 for men.

Searching the phrase on YouTube rakes up thousands of videos, and while each YouTuber has their own take on the challenge, most use it as a chance to gorge as much junk food as possible.

YouTuber Furious Pete, who has more than three million followers, ate 10,000 calories in one go by making giant pieces of French toast. In one sitting, he ate three loaves of brioche bread cooked in egg, full-fat milk and butter, topped with chocolate and peanut butter. And he looks understandably defeated by the end of the video.

Others take a slower approach. Rob Lipsett, who has more than 91,000 subscribers, told his fans that the 10,000 calorie challenge is a “YouTube rite of passage.”

In one day, he ate French toast, American pancakes, four cookies, a burger, fries, three pizzas, cheese, and a tub of ice cream. Undefeated by the mountain of food, he pledged to eat 20,000 calories if 20,000 users liked the video.

As a person needs to eat around 3,500 extra calories to put on a pound of fat, the challenge will likely cause around 3lbs of weight gain and would take around 10 hours of intense training to burn off.