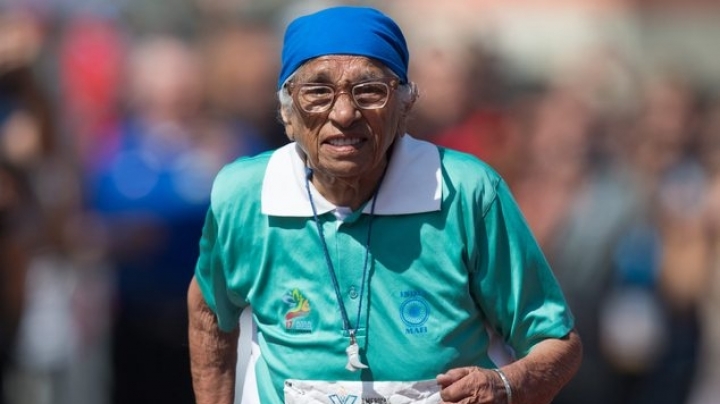 Man Kaur needed almost a minute-and-a-half to cross the finish line in the 100-metre sprint, but she still picked up a gold medal, reports Daily Mail.

That's because the 100-year-old, from India, was the only female competitor in her age category at the competition for older athletes.

When she crossed the finish line at the American Masters Games in Vancouver, dozens of people — many of them in their 70s and 80s — were there to cheer her on.

Kaur's energy and drive to compete have become an inspiration to participants in the unique international event for athletes over 30.

'When she wins, she goes back to India, and she's excited to tell others, "I have won so many medals from this country,"' said her son Gurdev Singh, 78. 'Winning makes her happy.'

After Kaur finished the sprint in one minute and 21 seconds, she stood smiling with her hands raised in the air.

Asked how she felt, she breathed heavily and clutched a bottle of water, unable to speak. Earlier, she won gold medals in the javelin and shot put.

Singh, 78, who also is competing in the Games, said he encouraged his mother to start running at age 93 because he knew she could become a star.

Kaur has now won more than 20 medals in Masters Games across the globe.

While practicing in her home of Chandigarh, she goes out every evening to run five or 10 short distances, said Singh.

Singh said his mother believes in promoting running to other older women.

Charmaine Crooks, a five-time Olympian who won a silver medal for Canada in the women's 4x400-meter relay in 1984, serves as an athlete ambassador for the Masters Games. She praised Kaur's 'dynamic spirit.'

The World Masters Games take place every four years, with regional games in between.

The average age of the athletes is 49, and there's one man who is even older than Kaur — 101-year-old Nihal Gill of Richmond, British Columbia.