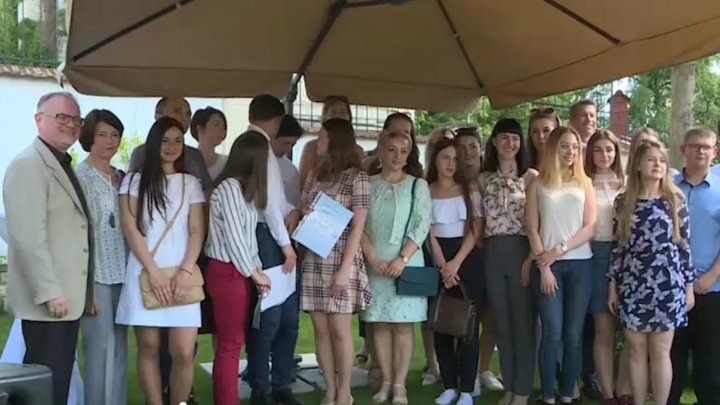 10 young people from the Republic of Moldova will have free university studies in Germany. They were selected after having successfully passed a series of tests in an international academic exchange contest.

The scholarships were offered by the German ambassador to Chisinau, Julia Monar.

Alina Lozan has already chosen a university in Göttingen.

"I think a great idea to study abroad and to go back to the country. I think Moldova needs specialists," said Alina Lozan, a German scholarship winner.

Victor Corman was admitted to a university in Berlin.

"The competition was very tight, so many students left and I am very happy and grateful to win the scholarship," said Victor Corman, the winner of a scholarship in Germany.

"The DAAD German Scholarship Service offers scholarships every year for students, even for students who have studied German more deeply in schools, but also for university professors," said DAAD's representative in Moldova, Josef Sallanz.

During the event organized in Chisinau, the best three German language teachers in Moldova were also awarded.

Winners of the academic exchange service will receive scholarships of up to 1,000 euros per month.

In the Republic of Moldova, about eight thousand pupils and students from 130 schools and seven universities learn German.