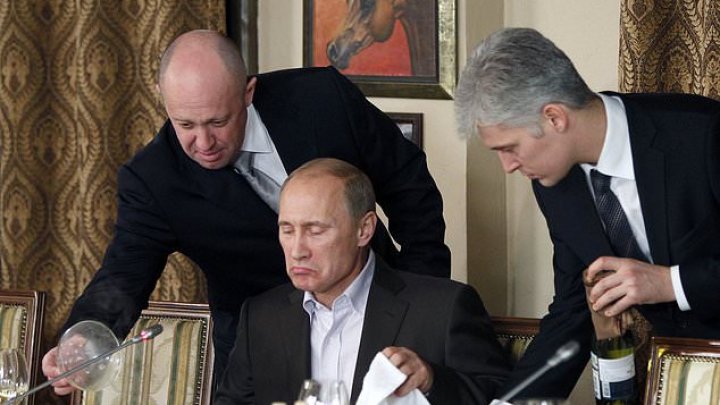 The Russian known as 'Putin's chef' indicted for meddling in the presidential election is accused of being behind the Russian mercenaries who staged an attack on U.S. forces in Syria this month.

The Washington Post reported that the Russian oligarch Yevgeniy Prigozhin was in communication with a high level Russian official in advance in the attack – which resulted in a rout against the Russian mercenaries but nevertheless placed U.S. and allied forces in harm's way.

Prigozhin was caught on an intercepted communication saying he had 'secured permission' from a senior Russian minister to go ahead with a 'fast and strong' initiative in early February.

Prigozhin got indicted last week, as deputy attorney general Rod Rosenstein announced charges against 13 Russians. He is alleged to be the director of a Russian 'troll farm' that interfered in the U.S. elections.

U.S. intelligence believes he 'almost certainly' controls the Russian mercenaries in Syria, according to the Post.
In the Feb. 7 and Feb. 8 attack, 'pro-regime' forces backing President Bashar Assad went after a U.S. base. The U.S. set up 'deconfliction' tactics with the Russians, who back Assad, to try to avoid a clash or mistake.

A week ago, Prigozhin was among 13 Russians indicted in Washington on charges of meddling in the 2016 U.S. presidential election.

The journey of Yevgeny Prigozhin from troubled youth to ex-con entrepreneur with companies worth hundreds of millions of dollars reflects what one expert says is a typical pathway to riches in post-Soviet Russia: the willingness to do favors and 'dirty tasks' for Putin that others would find too risky.

On Feb. 16, Prigozhin was indicted by special counsel Robert Mueller in an elaborate plot to disrupt the 2016 election. The indictment said he funded the Internet Research Agency, a 'troll factory' that used social media accounts to 'sow discord in the U.S. political system.' It said workers at the firm used YouTube, Facebook, Instagram and Twitter to conduct 'information warfare' against the U.S. to promote or disparage political candidates.

After his indictment, Prigozhin was quoted by the state news agency RIA Novosti as saying: 'Americans are very impressionable people; they see what they want to see. ... I'm not at all upset that I'm on this list. If they want to see the devil, let them see him.'

Alexandra Garmazhapova, a reporter who briefly worked undercover at the agency in 2013 to write about it for her newspaper Novaya Gazeta, said workers at the building in suburban St. Petersburg at that time were focused on domestic politics, targeting the opposition inside Russia.

The factory was just starting out, Garmazhapova said, adding that she saw signs of an expansion. The firm went from several dozen employees to at least 300 full-time workers.

'They were actively hiring, had several meetings a day, the work was ongoing. The feeling was that (Prigozhin) wanted to do Vladimir Vladimirovich (Putin) a favor - but didn't harbor plans to conquer the world.'

Prigozhin, a restaurateur who ran a catering company and was dubbed 'Putin's chef,' had other projects on his plate. He has been linked to a shadowy military firm that has sent private Russian contractors to fight in Ukraine and Syria on the side of Moscow's allies.

The 56-year-old Prigozhin is an 'ideal villain who gets asked to handle various delicate and dirty tasks,' said Andrei Kolesnikov of the Carnegie Moscow Center. 'Actually, it is typical of authoritarian regimes to outsource violence.'

A graduate of a boarding school for promising athletes, Prigozhin ran into problems with the law at age 18, when he was convicted of robbery and running a prostitution ring. He served nine years in prison.

After prison, Prigozhin and his stepfather took advantage of Russia's nascent market economy following the collapse of the Soviet Union and opened hot dog stands. By the late 1990s, Prigozhin was operating swanky restaurants that were frequented by Putin and visiting foreign dignitaries, earning his nickname from the Russian media.

His proximity to Putin really started to pay off in the 2010s, when companies associated with Prigozhin began getting lucrative Defense Ministry contracts ranging from catering to cleaning services.

His companies won 23 contracts worth a total of 23 billion rubles ($387 million). The Federal Antitrust Agency found the firms guilty of breaking the law, but in November, it suddenly closed the case and refused to impose hefty fines against Prigozhin's firms after they pleaded guilty to the charges.

Lyubov Sobol, who led an investigation for the Foundation for Fighting Corruption, told The Associated Press that the ease with which Prigozhin has avoided investigations shows his special relationship with the Kremlin.

'He is under Vladimir Putin's protection and is beyond reach for police and courts in Russia,' Sobol said.

Navalny's foundation has received communications from Prigozhin's former employees who complained of threats and violence.

Sobol, whose husband was attacked last year in what she suspects was retaliation for her investigation, said Prigozhin keeps a low profile.

'He has never sought publicity. All he wanted was to make money and do favors for Vladimir Putin,' Sobol said.

When fighting broke out in 2014 in eastern Ukraine between the pro-Moscow separatists and Ukrainian government forces, Russia limited its presence there to clandestine troop deployments and funding and training for the rebels.

Former Russian soldiers were recruited to join the separatists by a shadowy company called the Wagner group, whose founder, Lt. Col. Dmitry Utkin, came under U.S. Treasury Department sanctions for the firm's actions in Ukraine. Prigozhin was sanctioned in 2016 by the U.S., which cited his companies' Defense Ministry contracts related to the conflict in Ukraine.

Russian media has reported that thousands of Russians under contract to the Wagner group also have fought in Syria since 2015, helping turn the tide of battle there in favor of President Bashar Assad, Moscow's longtime ally.

Putin wanted Russia's involvement in Syria to be different from its intervention in Afghanistan and Chechnya, which claimed many lives and were widely unpopular. The secret deployment of private contractors in Syria has helped keep the official Russian death toll low as Putin seeks re-election.

When Russians were killed earlier this month in a U.S. attack in Syria's Deir el-Zour province, the Russian government insisted that Moscow did not send them there. Hiring mercenaries or working as one is against Russian law.

The Wagner group 'is not a classic private contractor; it is ... an unofficial arm of the Defense Ministry,' said Ruslan Leviev, whose Conflict Intelligence Team has studied the clandestine Russian deployment in Syria.

He said Prigozhin was the right person to take up the task, 'compared to any other oligarch of Putin's.'

Evro Polis, a company linked to Prigozhin, has signed an agreement with Syria's state-owned General Petroleum Corp., which gives the Russian company 25 percent of the proceeds from oil and gas production at fields its contractors capture and secure.

Prigozhin is hardly the only Russian oligarch to do favors for Putin.

Russia's richest men spent billions of dollars to help construct hotels and sports venues for one of Putin's pet projects, the 2014 Sochi Winter Olympics, which went over budget and was rife with corruption. They were later rewarded with bailouts from state-owned banks.

'In some areas (of the economy) in Russia, you don't know where the government ends and private business begins,' said Moscow-based political analyst Alexei Makarkin.

Unlike some Russian oligarchs, Prigozhin might not mind doing the riskier favors because his interests are more local.

'Prigozhin is no longer the man who just serves food - he has more important projects now,' Makarkin said, but adds that he 'doesn't have the ambitions of entering the global elite or finding international partners.'