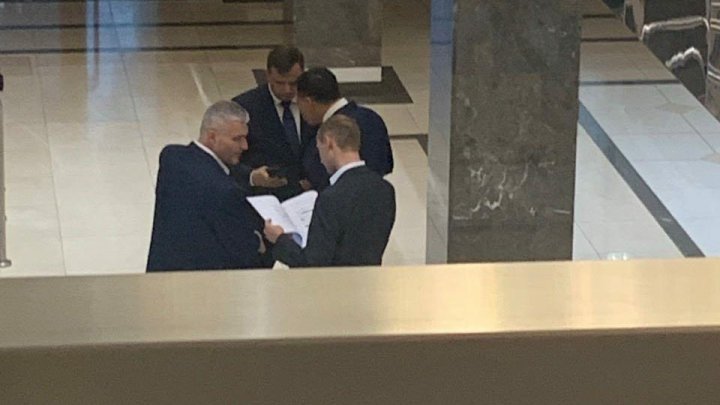 The TV stations PUBLIKA TV and PRIME TV were attacked by the PPDA MP Alexandru Slusari at the suggestion of his party leader, Andrei Nastase.

A photo taken in the Parliament building was sent to our newsroom. In this image Alexandru Slusari appears with several papers in his hand, and next to him is the PPDA leader, Andrei Nastase.

The author of this photo wrote to us that the moment was surprised yesterday, before Slusari went out to press and attacked PUBLIKA TV and Prime. And the Minister of the Interior came to Parliament specifically to give directions to his subordinate.

Coincidentally or not, but at the press conference, in which Slusari attacked the uncomfortable press, he escaped the talk and said that he received the papers before coming in front of journalists.

PUBLIKA.MD recalls that Slusari's party chief, Andrei Năstase was harshly charged by the media NGOs for attacking and intimidating PRIME TV chief editor in a press conference, which took place in the Parliamentary election campaign. As a result, Nastase was included in the list of press foes, and his photo appeared on a panel of shame. Alexandru Slusari and Andrei Năstase did not comment on the allegations.
AFLĂ imediat Știrile Publika.MD. Intră pe Telegram