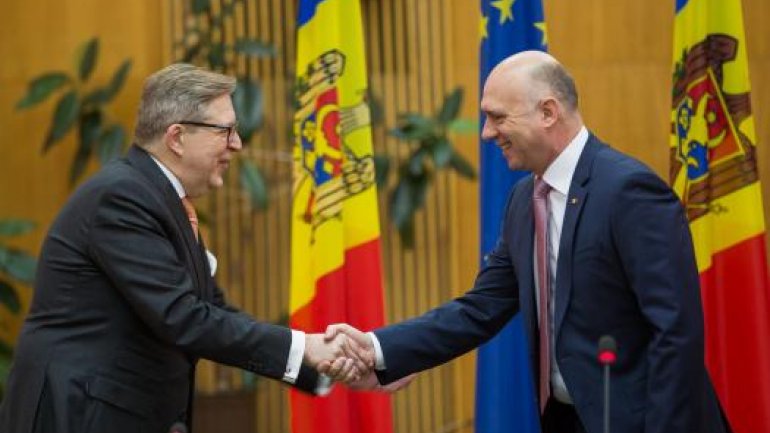 Prime Minister Pavel Filip held a meeting with Ambassadors of partner countries for development of the country: the member states of EU, US, Turkey, Switzerland, attended by members of the Cabinet.

The prime minister said that this common platform of discussion is important to exchange views on the latest developments in the country and priorities for the future path.

In context, Pavel Filip talked about the main achievements of 2016, including the signing of a new agreement with the IMF, along with the release of EU aid and of other bilateral partners, such as Romania, adoption of the package of laws reforming, which allows consolidation of transparency, justice, reducing barriers for business and the realization of National Action Plan on the implementation of the Moldova-EU association agreement for 2014-2016 at over 87%.

"2016 was a year of crisis management and stabilization of the situation. 2017 will be the year of growth and investment" , said Pavel Filip.

Among the priorities set by the Government's reform agenda, the prime minister highlighted the reform of public administration, health, employment, pay system in the budgetary sector.

"Many of the reforms are painful and ambitious but absolutely necessary to improve the quality of life of citizens of Moldova. We will keep them, trying to communicate as effectively both reforms and the EU support. For me it's very important to make the EU again popular in Moldova" , Prime Minister said.

Pavel Filip has asked development partners to establish a new framework of strategic partnership to take account of the Government's reform agenda, noting that it is important for Moldova to be helped.

Meanwhile, Head of the Executive has reiterated that the European road project remains our sovereign national interest and the government will do everything in its power to turn the citizens' trust in the European path and in the EU.

In turn, the diplomats thanked for the invitation in order to have this exchange of views on the reform agenda of the Government and encouraged the authorities to continue their efforts to return public confidence in the European course of the Republic, for it to become tangible for all citizens country

All ambassadors expressed their readiness to support the Government in the successful implementation of reforms aimed at improving the living standards of the population.