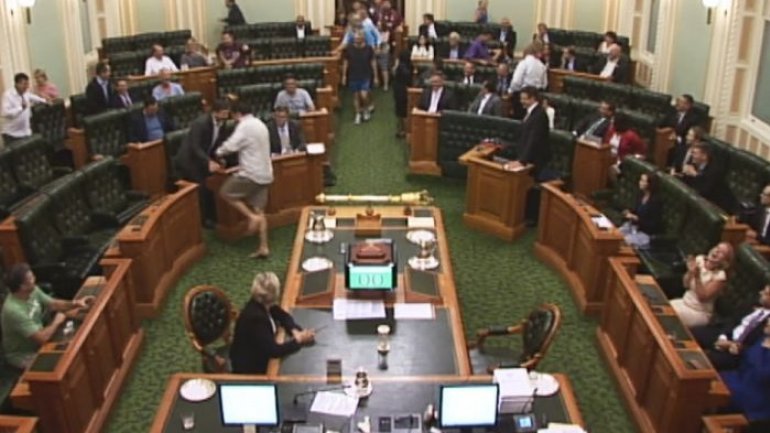 Queensland politicians streamed onto the floor of parliament half-dressed or in casual garb after being caught napping before a surprise early morning vote on Thursday, reports the Guardian.

The comical spectacle of opposition MPs in bare feet, shorts and T-shirts, Queensland football jerseys – and in one striking case a jacket over a bare chest – took place after a division was unexpectedly called at about 2.30 am.

Labor ministers Kate Jones and Jackie Trad could be seen clapping and doubling over in laughter as their Liberal National rivals rushed in from their parliamentary bedrooms to take their seats.

In one hurried nod to parliamentary decorum, long-term Hervey Bay MP Ted Sorensen arrived in a jacket without a shirt.

After debate over water licences for mining companies pushed the sitting into the small hours, the division bell rang suddenly after LNP MP Jeff Seeney was denied the chance to join an adjournment debate because he was not listed as a scheduled speaker.

Despite the half-dressed MPs rallying, the opposition lost the vote 42-32, before the sitting finally ended just before 3am.

A scheduled debate on the Palaszczuk government’s bill to reform controversial organised crime laws in another sitting later on Thursday is expected to push the proceedings once again well past midnight.