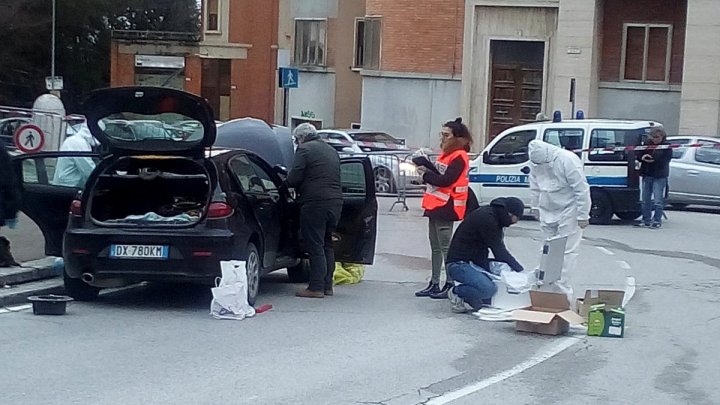 An Italian man opened fire on African migrants in the central city of Macerata on Saturday, injuring six people before he was captured, in what police said was a racially motivated attack.

The shootings happened just days after a Nigerian migrant was arrested in connection with the death of an 18-year-old Italian woman, whose dismembered body was discovered stuffed into two suitcases near Macerata.

Police named the suspected shooter as Luca Traini, 28, and said he had an Italian flag draped over his shoulders when he was seized in the street by armed police. Onlookers said he made a fascist salute before being handcuffed.

“He drove around in his car and when he saw any black people he shot them,” Marcello Mancini, a Macerata resident, told Reuters television. Police said one of the six victims was seriously hurt and needed surgery, but gave no further details.

Traini also fired shots at the offices of the ruling center-left Democratic Party (PD) in Macerata, but did not injure anyone there. The PD said he had stood as a candidate for the rightist Northern League at local elections last year but had not received any votes.

The League backs fiercely anti-immigrant policies and is part of ex-prime Silvio Berlusconi’s center-right alliance that is leading in the polls ahead of a March 4 national election.

League leader Matteo Salvini distanced himself from the shooting, but blamed mass immigration for the tensions.

“I can’t wait to get into government to restore security, social justice and serenity to Italy,” he told reporters.

“The man who fired the gun, hitting six people of color, is a squalid, mad person. But the state is stronger than him,” he wrote on Facebook.